What's behind this new programming?

Our NSW HSC economics programs use a syllabus that we can see reflected in most economics classrooms around the world. In fact I have seen this! I've been to Park Avenue schools in New York and colleges in the most poverty stricken areas of the Philippines -even Hwa Chong in Singapore, a world class school with an economics cohort hungry for the discipline. There are schools too in the North of England bracing for Brexit and its dire consequences for their NE economy blossoming under the EU (see https://www.wendymockler.com/). They are all moving through the same basic principles, histories and examples. And they all teach more or less the same set of prescriptive economics concepts and frameworks that we do in NSW. ​You could say that economics has a standardised curriculum that spans the globe. In all of these classrooms they all used the same set of traditionally laid out studies to navigate the discipline of economics. The usual suspects: the nature of economics, the operations of economies, the role of business, consumers, governments and financial institutions and so on. Every principle is closely examined in the tightly held and narrow gaze of an economic scientist. After all, this is what we were taught and it has served us well. The thing is, however, our emerging generations are turning away from economics, it isn't serving them and if we don't sharpen our pencils and redraw the economic design, as economic teachers we'll become extinct.

When I set out to program this Preliminary course in Economics I wanted to tell a new story. I remapped the syllabus, not leaving anything out but re-ordering and re-purposing so that a bigger idea could emerge. This bigger idea is about how economics can truly serve a future, a future that is fair, sustainable and supports the well-being of people. This is how I felt about economics when I studied it, that I was part of a hive mind that embraced the complexity of the world and knew all its secret hiding spots and that I could trust economists to keep me safe.  We're not safe anymore though, and our students know it. We need to rethink how economics is taught and what assumptions we've held on to that have gotten us to this point. We need to draw back the curtain and like Oz, stop pretending that the levers and mirrors are part of a fantastic world. It's time to tell a new story. This future-proofing economics course tells students economics is not value-free and that some perspectives advantage people with power and influence and we need to have a bigger conversation.

I have used a range of resources (all referenced throughout) but Kate Raworth's Doughnut Economics: Seven Ways to Think Like a 21st Century Economist provided a framework for moving students on from a 20th century paradigm.
I've included the series of Doughnut Economics YouTube clips that are available at https://www.kateraworth.com/animations/ that introduce each of these concepts. The ideas behind these concepts aren't new to anybody who has been a student or a teacher of economics. They are the inevitable 'stone in your shoe' when you're musing over the traditionally taught economic theories. In this globally connected world, students are questioning where we've papered over the cracks in economics. We don't need to give them all the answers but we do need to equip them to critically evaluate and creatively imagine the solutions we will need to take us in to a future worth living.

Next to each concept I've included where this concept is introduced to students in the context of the syllabus.​

Behind cognitive load theory is the current understanding of the way our working memory and long-term memory process and store language. Our working memory can store small amounts of information for a very short time. The length of our concentration span has seemed to dwindle and with economics being so content rich at times, it can present some problems for our students. Research supports the notion that people can only hold around four chunks of information in a limited time. Overloading the working memory seriously impedes students' learning. The real powerhouse that moves students on with their learning is our long-term memory.

Research suggests the long-term memory uses schemas which organise how information will be used. "According to schema theory, skilled performance is developed through building ever greater numbers of increasingly complex schemas by combining elements of lower level schemas into higher level schemas" (CESE, 2017, p. 2). Supporting students to use these schemas avoids overloading the working memory and avoids a slowdown. Creating schemas through conceptual understandings helps student learn and frees up their working memory to take on new challenges as they are presented.

Implications for teaching and learning

Two camps have emerged in a dichotomy of approaches to teaching. They range from inquiry learning where students uncover and construct their knowledge and explicit instruction where clearly articulated learning goals are communicated and teachers provide the material to get there. This teaching and learning program I have constructed for economics is not advocating one over the another but it does take an approach that explicitly teaching concepts in the preliminary economics course helps students establish a grounding in the discipline. In managing their cognitive load, research suggests that students will be more motivated and engaged in their learning. The following excerpt provides some clear recommendations.

In devising the first unit, The Economics of Everything, I have aligned elements of the six units to build a big picture of the economy, and posed these conceptual questions throughout class discussions, embedded in the learning design.

Is our economy future-proof?
How does the economy contribute to my well-being?
Who is making decisions about my economic future?

The initial layout of concepts in the first topic is a cursory glance in some areas but it introduces to students the main ideas that they can build on as the course progresses. It introduces these chunked concepts to their working memory around the schema of well-being and sustainability. In subsequent units, students can access introduced concepts and began to layer meaning around them, moving to an analytical framework to show their understanding. For example, demand and supply are introduced in The Economics of Everything and students learn only how to identify different elasticity curves. In Curious Choices they come back to this concept and begin to calculate price elasticity for individual demand curves. In The World is Not Flat students go back to this concept again to investigate how the role of business relies on price and demand elasticity and the concept of cross-elasticity is introduced. In To Infinity and Beyond they return to this concept of elasticity and its moderating effects on economic policy. It supports students in evaluating the effectiveness of monetary and fiscal policy and their implications for the economic well-being of a country's citizens. The layering effect supports a students' working memory and builds schema for long-term memory storage. 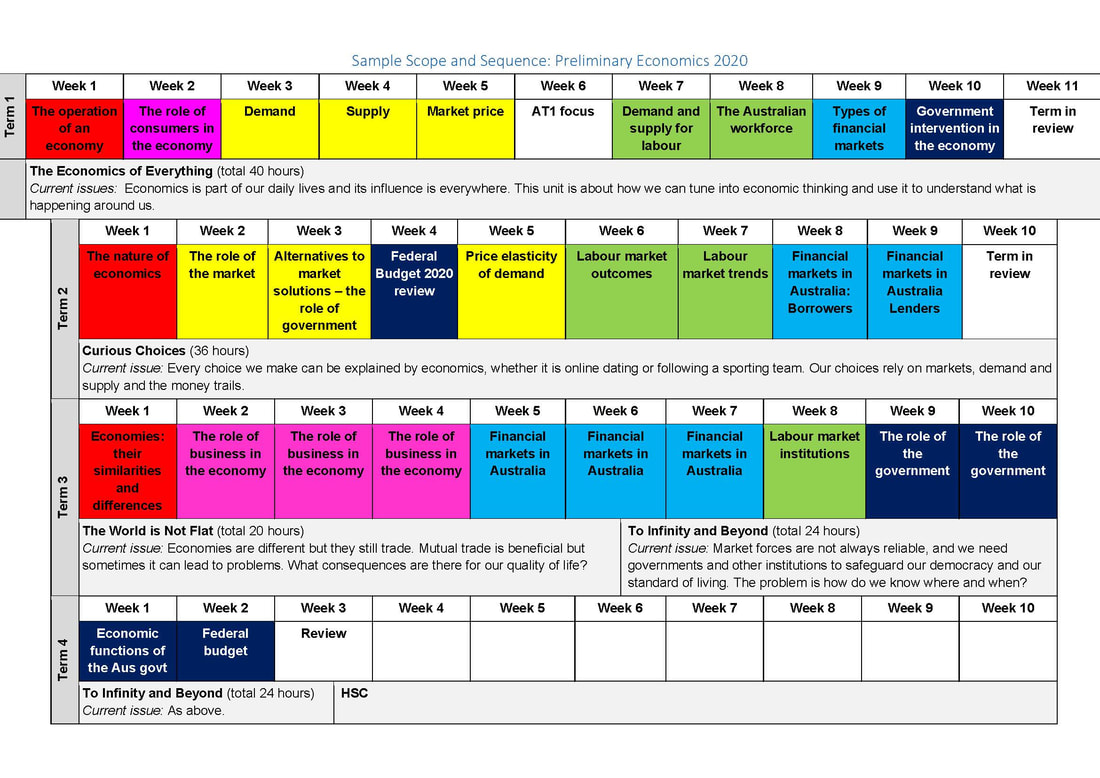 ​The teaching and learning program is in the development phase and will require some changes as the reality of the classroom moulds what really works, but in the meantime, I'd like to hear from you about your initial thoughts on how it might work as a programming approach. Use the padlet below to add a comment.